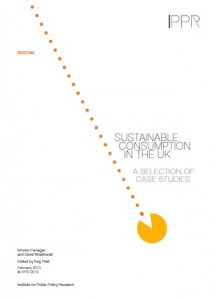 IPPR have just published one of Future Climate’s first pieces of work (undertaken last summer): a review of ten sustainable consumption initiatives in the UK, designed for an international audience.

The mandate was simple: analyse ten high profile projects to change consumer behaviour and see how well they’d done, the barriers and learnings.  We covered initiatives from Hugh’s Fish Fight to the 2011 voluntary retailer initiative on energy consumption of TVs.

The big theme in the report is the relationship between the role of the government controlling product choice and that of voluntary awareness and behaviour change campaigns.  Generally the idea is of a virtuous circle where public awareness provides cover for progressive legislation that in turn enables large scale voluntary behaviour change –  all building to a step change in what and how we consume.

But perhaps that’s not always how it works – particularly when its the more boring end of sustainable consumption. In 2006 – after years of noble awareness raising by environmental groups – the penetration of highly energy efficient central heating boilers in homes remained stubbornly below 5%. The public just couldn’t be persuaded to buy more expensive boilers, whatever their energy saving or carbon merits.  But by 2010, 42% of homes had condensing boilers. The change was achieved through mandation in the building regulations in 2007 – mandation that passed almost entirely without notice among consumers.

This case study of condensing boilers – covered in our report – is supported by other evidence that suggests that the public accept and expect government to play a leading role in limiting choice around major areas of home technology. Of course it depends on the product and it depends how its done – the banning of inefficient light bulbs has gone much less smoothly. But our evidence suggests that choice editing by government, even for major home improvements, is an important part of sustainable consumption policy. Lets hope Eric Pickles, currently reviewing building regulations, reads the report.

We recently held the official launch of Future Climate with a group of colleagues, friends and stakeholders.  Whilst it is only the […]

Apartment blocks in Europe are a challenge for energy refurbishment. A lot of the difficulty arises from the way they are owned […]